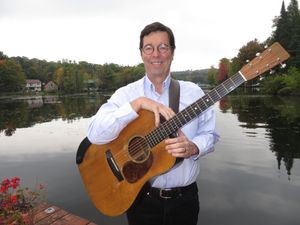 Guitarist Dave Clarke is well known for his role in Montreal-based folkgrass trio Steel Rail, but he has a thriving solo career and has a growing reputation as a producer and arranger.
Dave has been called one of Canada’s finest and most tasteful acoustic guitarists. In addition to Steel Rail, Dave was a member of the West Coast quartet Shearwater Bluegrass, the Montreal jazz-folk-swing band Soupe du Jour and the legendary Montreal-based White River Bluegrass Band. He has also toured with such performers as David Francey, Penny Lang and Barde.
Dave’s tasty picking and his 1938 D-18 Martin guitar have been featured on everything from bluegrass albums to television soundtracks, and one of his instrumentals is featured on the album Six Strings North of the Border, along with those of such other guitar luminaries as Bruce Cockburn and Don Ross. His debut solo instrumental album, Guitar Songs, showcases his lyrical melodies and unique blend of folk, bluegrass and Celtic sensibilities. His second solo album, Reunion, features both songs and instrumentals, with guest appearances by an array of folk friends, including Francey, Lang, Tammy Fassaert and Bill Garrett and Sue Lothrop.
In 2022, Dave's third solo album, The Healing Garden, was nominated for a Canadian Folk Music Award in the instrumental category. He was also nominated for a CFMA award for his work in co-producing Steel Rail's 2020 album Coming Home.
Dave produced the Steel Rail albums River Song and The Road Less Travelled. He appeared on Francey’s first CD, Torn Screen Door, as guitarist and producer and on two other Francey CDs, Far End of Summer and Skating Rink, as guitarist and co-producer (along with Francey and multi-instrumentalist Geoff Somers). The collaboration resulted in Junos for Best Roots and Traditional Recording (solo) in 2002 and 2003.

For more information about Dave, please check out his website.